The Story Behind Jonathan David Publishers

Shortly after graduating from New York’s prestigious Jewish Theological Seminary of America, Alfred J. Kolatch—a Seattle native who grew up in Brooklyn, New York—found himself serving as a pulpit rabbi in Columbia, South Carolina. In that southern U.S. community, he was amazed to discover, not one of the religious school students knew his or her Hebrew first name. 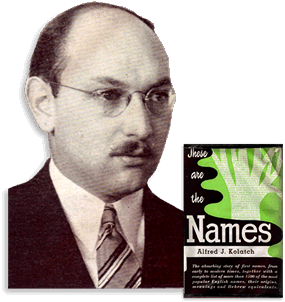 To rectify that, the young rabbi set out to assign to the children Hebrew names that approximated the meaning of their English names.

Rabbi Kolatch’s fascination with personal names and their meanings continued when he enlisted as a chaplain in the U.S. Army two years later. When not tending to the spiritual needs of soldiers who were about to be dispatched to Normandy and other European theaters, he continued his exploration of the world of nomenclature and began to record his findings. That tireless research eventually resulted in the publication of his first book, These Are the Names. And thus, in 1948, the Jonathan David Publishers imprint was born. The company moniker was drawn from the first names of his two sons, who in the Bible were known for their fierce loyalty to one another.

These Are the Names, and its seven sequels—The Name Dictionary, Names for Boys & Girls, and The Comprehensive Dictionary of English and Hebrew First Names among them—eventually became a cottage industry, selling in the millions and establishing Alfred J. Kolatch as one of the world’s leading authorities on first names. These many years later, clergy still carry their well-thumbed copies of these works to baby-naming events.

Upon completing military service, Kolatch decided to leave the world of the rabbinate. Long fascinated by the written word, he thrust himself into the publishing profession full time. Building Jonathan David Publishers from the ground up was no easy task. At the outset the firm developed a full range of educational tools for Jewish religious schools and institutions, as well as jewelry and novelty items for adults and youngsters. In time, however, as the company grew, the focus changed exclusively to creating Jewish-themed nonfiction for a popular audience. The company’s needs began to grow as well, and in 1970, after years of operating out of various Manhattan locations, Jonathan David acquired a building of its own in Middle Village, New York.

Jonathan David became known in the industry as the premier publisher of popular Judaica, but it expanded its reach by including more general-interest works of a secular nature.

While nurturing other authors, Alfred J. Kolatch continued to devote himself

To date, some 700 titles have appeared under the JD imprint, including such classics as Henry D. Spalding’s Encyclopedia of Jewish Humor, Maurice Lamm’s Jewish Way in Death and Mourning, and Elinor and Robert Slater’s Great Jews in Sports, Great Jewish Women, Great Jewish Men, and Great Moments in Jewish History. We invite you to explore our site and learn more about these and other of our publications. Welcome to JDBOOKS.COM!